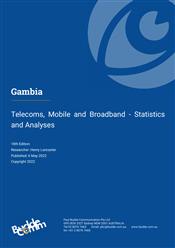 Gambia’s telecom market is dominated by the incumbent telco Gamtel, which retains a monopoly on fixed-line telephony services. There are five mobile network operators providing effective competition, though Giraffe Telecom was only licensed in January 2022 and is yet to be assigned spectrum. The market leader is Africell, with about 62% of the market, while Comium and QCell compete closely for second and third place. Gamtel’s mobile unit Gamcel is by far the smallest operator, having suffered from underinvestment in recent years. Comium has also suffered from financial difficulties: its failure to pay accumulated fees resulted in the government having sought a temporary suspension of its services in mid-2021.

Mobile penetration is well above the African average, itself a testament to the poor condition of the fixed-line infrastructure and the lack of availability of fixed services in many rural areas of the country.

Although the incumbent has a relatively well-developed national fibre backbone network, low fixed-line penetration has hindered internet usage. There are only four licensed ISPs, which are small operators serving local areas, and so competition is minimal. Their limited services are complemented by the fixed-wireless offerings of three of the MNOs.

The government has embarked on a National Broadband Network program aimed at closing the digital divide affecting many parts of the country. Gamtel launched services based on this network in late 2019, though on a limited scale. Despite efforts to improve internet connectivity, the country ranks among the lowest globally in terms of digital readiness.