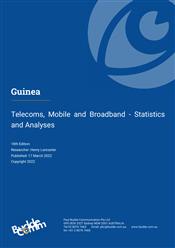 Guinea’s telecom market is dominated by MTN and Orange. After the entry of these regional players, the number of mobile subscribers grew strongly while revenue also increased steadily. The debt-stricken incumbent fixed-line operator Sotelgui provided a mobile service until it was closed down in late 2012, following a long period of mismanagement. The company itself was declared bankrupt in 2013, and stopped operating The government since 2019 has sought to secure partners and investors to help launch a replacement operator, Guinea Telecom, but thus far with no success.

Fixed broadband services are still very limited and expensive, though there have been some positive developments in recent years. The landing of the first international submarine cable in 2012, and the setting up of an IXP in mid-2013, increased the bandwidth available to the ISPs, and helped reduce the cost of internet services for end-users. A National Backbone Network was completed in mid-2020, connecting administrative centres across the country. In practice, almost all internet connections are made via mobile networks. GSM services account for a dwindling proportion of connections, in line with the greater reach of services based on 3G and LTE.