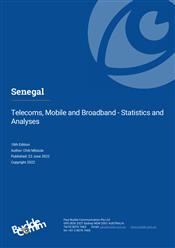 Senegal’s telecom market continues to show steady growth in all sectors. This has been supported by the particular demands made on consumers during the pandemic, which resulted in a particularly strong increase in the number of subscribers. The mobile subscriber base increased 6.7% in 2020, year-on-year, and by 4.1% in 2021, while the number of fixed broadband subscribers increased 17.5% year-on-year in 2021. In common with most markets in the region, mobile internet platforms account for the vast majority of all internet accesses. Quality of Service issues continue to plague the market, with the regulator periodically issuing fines to the market players.

Orange Group’s local subsidiary Orange Senegal (Sonatel) remains the dominant player in both the fixed-line and mobile sectors. Free Senegal and Expresso Telecom provide effective competition, and though their relative market shares have been relatively stable since 2013, Free has more recently made some inroads to the share held by Expresso. This can partly be explained by the two-year delay in Expresso launching LTE services, and so losing new subscribers to its competitors. Both Sonatel and Free continue to pilot 5G services in the country.

Orange Senegal for some years held a near monopoly on the fixed-line, though moderate competition became effective after Expresso launched services as the second national operator in 2009. However, Expresso soon afterwards stopped investing on the sector, and it stopped providing fixed telephony services in September 2018. In February 2021, the regulator ordered the company to relaunch fixed telephony services, and so adhere to its licence terms. By the following September it had signed up several thousand customers.