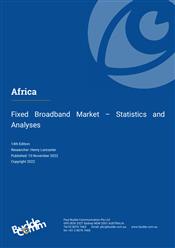 Countries across the African region continue to develop telecoms infrastructure, both on a national and international level.

For many years, the region was deeply compromised by the legacy of underinvestment and neglect from governments and sector regulators alike. This had resulted in most countries on the continent having inadequate fixed-line services. In some markets, the situation was exacerbated by civil wars and other conflicts which either destroyed what had been built, or caused sufficient security concerns that the necessary work required to expand infrastructure in cities and across rural areas was seriously inhibited. This situation remains in some countries today, including areas of Mali, Mozambique, the DRC and others.

Although mobile networks carry by far the vast proportion of voice and data traffic in all countries in the region, there has been much progress made in recent years to shift traffic to fixed networks. This has been rendered possible by greater investments made in terrestrial and submarine cable systems. These investments in turn have been either via the efforts of private operators, such as Liquid Intelligent Technologies, or by national governments. The latter have shown a greater interest in recent years to develop such networks as a way to promote their countries as ICT hubs, in turn attracting international investment.

A notable example of these ambitions is shown by Egypt, which in recent years has worked on a number of digital migration projects aimed at increasing average broadband speeds, delivering fibre broadband to about 60% of the population, developing an in-house satellite program, and creating a knowledge-based economy through the greater adoption of ICTs. The New Administrative Capital being built is only one of more than a dozen smart city projects, which together are stimulating investment in 5G and fibre broadband. There has also been a strong adoption of IoT and AI solutions. The ICT sector is being built up as part of a wider effort to diversify the economy, as envisioned in the country's Egypt Vision 2030 roadmap.

In many other countries, such as Malawi, governments are building national fibre backbones to extend connectivity deeper into rural areas. The first phase of Malawi's backbone project, running to 1,320km, was completed in 2018. The second phase, running to 2,800km, was started in June 2021. This second phase also included a new data centre, and focussed on providing services to public buildings and businesses.

Increasing backhaul capacity is fundamental to these nations being able to improve fixed-line telecom services, as well as to support growing mobile data traffic. These projects are being effectively supported by regulatory measures and by governments which understand the key functions of broadband connectivity for economic growth. Some considerable momentum has been achieved in several countries, and this has motivated others to keep on track with their own projects, not wishing to be left behind in the emerging digital landscape.