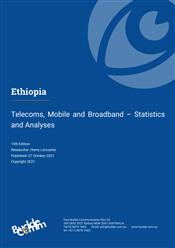 The slow process to open up Ethiopia’s telecom market was completed with the licensing of the Safaricom-led Global Partnership for Ethiopia consortium. The country had been one of the last in Africa to allow its national telco a monopoly on all telecom services including fixed, mobile, internet and data communications. This has stifled innovation, restricted network expansion, and limited the scope of services on offer. The consortium was in some respects a proxy for the wider influence over Ethiopia’s telecom sector between the interests of the US and China.

Only one of the two licenses on offer was secured, with uncertainty as to the timetable for issuing the second licence. In the meantime, the government in mid-2021 began the process of selling a 45% stake in the incumbent telco Ethio Telecom.

These developments have attracted considerable investment in the sector. In addition, the World Bank in early 2021 provided a $200 million loan to help develop the country’s digital transformation, while the government has embarked on its 2020-2030 program as well as its Digital Ethiopia 2025 strategy, both aimed at making better use of digital technologies to promote socio-economic development.

The country’s mobile platform has mostly been provided by ZTE and Huawei, which have offered vendor financing. Ethio Telecom has placed the expansion of LTE services as a cornerstone of its investment program to 2022. The new licensee has been barred from contracting Chinese vendors, thus opening the door to western vendors.