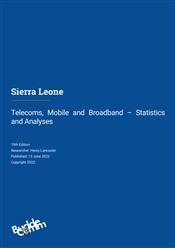 Although Sierra Leone’s political landscape has been stable since the closely fought election held in 2018, there remains considerable unease between the two principal parties. The current government continues to investigate widespread corruption among members of the previous government, while pursuing its economic plan through to 2023, at which time the next election is scheduled to be held.

The telecom sector has only gradually recovered from the destruction caused during the war years, and only since 2019 has there been an effective terrestrial fibre backbone infrastructure, while the cable link to neighbouring Guinea was not completed until February 2020. There is considerable available capacity from the ACE submarine cable and the national fibre network, but this is used inefficiently and so the price of internet connectivity remains one of the highest in the region.

The theft of equipment and cabling, compounded by neglect, mismanagement, and underinvestment, means that telcos continue to operate in difficult conditions. This has led to the demise of some telcos, including Comium and Smart Mobile. The telecom regulator has made efforts to improve the market, including the liberalisation of the international gateway and regular checks on QoS. It has not shied from fining miscreant operators for providing poor services, or for promoting packages deemed to be disadvantageous to consumers. To this end the regulator reduced the price floor for mobile voice calls in early 2020, though consumers objected to the MNOs withdrawing a number of cheap packages as a response.

Given the poor state of the fixed-line infrastructure, the mobile sector has been the main driver of overall telecom revenue. There continues to be movement in the market, with Orange Group in mid-2016 having completed its acquisition of Bharti Airtel’s local unit and the Gambian telco QCell being awarded a licence to operate mobile services.