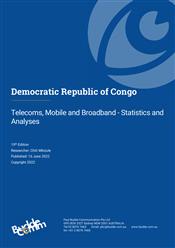 The Democratic Republic of Congo (formerly Zaire) has had a tortuous history since gaining independence. The country’s stability has been affected by disputes among rival groups and armed militias, particularly in the far eastern provinces and Katanga. This has resulted in considerable social upheaval, exacerbated by considerable corruption within the government.

The national telecom system remains one of the least developed in the region. The government can only loosely regulate the sector, and since the national telco SCPT has little capital to invest, much of the investment made in infrastructure is derived from donor countries or from the efforts of foreign (particularly Chinese) companies and banks. Efforts have been made to improve the regulation of the telecom sector, with a revised Telecommunications Act adopted in May 2018. However, the practical implementation of the Act’s measures remains questionable. Indicative of the character of the market is the levy on mobile devices imposed in 2020. While nominally intended to help address fraud, the levy has been widely condemned by consumers as a tax which has enriched a few. This sentiment has not been helped by the fact that the funds levied through to December 2021 could not be accounted for in government accounts.

Given the limited and decrepit condition of fixed-line infrastructure the mobile network operators have become the principal providers of basic telecom services. More than a dozen new licenses were issued in the early years of the century, but many of the licenses failed to launch services and the proliferation of networks, as well as the poor monitoring of spectrum assets, caused frequent problems with spectrum shortages, interference, and compatibility issues. As a result, the mobile sector entered a period of consolidation, including the acquisition of Tigo Congo by Orange Congo in April 2016, which greatly increased the latter’s market share.

The development of the DRC’s internet and broadband market has been held back by the poorly developed national and international infrastructure. However, the country was finally connected to international bandwidth through the WACS submarine cable in 2013, while SCPT continues to roll out a fibre national backbone network with support from China. Breakages in the WACS cable have exposed the vulnerability of international bandwidth, which is still limited. To address this, Liquid Intelligence Technologies has built a landing station for the Equiano submarine cable, and has also completed a 5,000km cable running through the DRC to link to cable systems landing in countries facing the Atlantic and Indian Oceans.

The country’s first commercial LTE networks were launched, albeit geographically limited, in May 2018 soon after LTE licenses were issued. Mobile operators are keen to develop mobile data services, capitalising on the growth of smartphones usage. There has been some progress with updating technologies, with Vodacom DRC having upgraded much of its GSM network to 3G by late 2021.