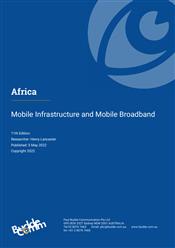 The telecom markets in all countries in Africa are dominated by mobile networks. These networks carry up to 98% of all voice and data traffic, and account for the largest proportion of voice and internet connections by far.

That this is so, is largely due to the historical neglect of fixed-line infrastructure over the last few decades. When telecom services became more widespread, it was economically more viable for operators to provide services via mobile infrastructure rather than to build out copper-based wireline networks. In this way, the mobile platforms gradually began to be built up. Given the relatively low demands of voice and basic data traffic in the region, networks based on GSM technologies have remained in place, whereas in more developed markets (notably the US, Europe, and parts of Asia) many GSM networks operated by MNOs have been withdrawn, and the spectrum has been refarmed for LTE and 5G use. In these more mature markets, the same process is underway with 3G networks, with assets including base stations as well as spectrum being repurposed for 5G. In Africa, by contrast, GSM and 3G will remain the bedrock of network infrastructure for some years yet, only being replaced by LTE and (in time) 5G as network demand requires. As such, 5G has only been deployed in a very few countries in the region, mainly covering the more economically active and densely populated areas.

Another issue relates to spectrum. For many years, MNOs in the region were hampered by the paucity of spectrum available, since most regulators as well as government departments which have been focussed on developing national ICT strategies lacked a sense of urgency, and thus were slow to enable sufficient spectrum to be released. The result was that spectrum auctions were delayed or cancelled repeatedly. Without new licenses being issued, network operators were obliged to extract what capacity they could from their existing concessions.

However, since 2020 greater efforts have been made to ensure that more spectrum is released, so enabling operators to satisfy growing traffic on their networks, and to improve service quality. The considerable increase in data traffic since 2020 has been spurred by the various restrictions put in place during the pandemic, which encouraged people to school and work from home, and to make greater use of online engagement, including via m-commerce and m-banking.

In addition, regulators have stepped up pressure on MNOs to improve their quality of service. While fines issued for poor QoS have become regular in many countries, in practice improvements in QoS rely heavily on the availability of additional spectrum, as much as on upgrades to technologies and systems.

These improvements are also being made possible by the increased investments in telecom infrastructure, both regional and international. Several submarine cables have come onstream during the last few years, while others including the 2Africa system, will be lit by 2024 and 2025. Together with terrestrial cable systems, such as the network built by Liquid Intelligent Technologies which link the eastern and western seaboards of the continent, and which provide extensive connectivity to a large number of inland as well as ocean-facing countries, these international cables are providing the backhaul capacity to enable MNOs to upgrade their networks and thus support increased data traffic. In coming years, MNOs in Africa will be better positioned to migrate from GSM and 3G to LTE and 5G platforms. This in turn will go far to realising the ambitions of governments in the region for their populations be more digitally inclusive, and so participate more extensively in technologically-driven economic development.