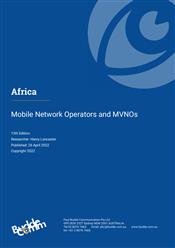 Given the poor fixed-line infrastructure in most countries across Africa, voice and data services across the region are greatly dependent on mobile networks. In the majority of markets, including those with better developed fixed infrastructure such as South Africa, Nigeria, and Kenya, up to 98% of all voice and data connections are via mobile networks.

During the last two to three years, national governments and telecom regulators have striven to improve fixed infrastructure with the wider aim of developing economic growth based on digital services and connectivity. This work is principally focussed on delivering fibre-based connectivity. Since the amount of copper infrastructure (DSL or HFC) used for broadband is so negligible, governments and private firms, including telcos as well as regional players such as Liquid Intelligent Technologies, are investing in fibre rather than in older technologies.

This work is delivering socio-economic benefits to a broader proportion of populations, and is encouraging digital inclusivity. The related benefits are particularly notable with m-money and m-commerce services, though there are also tangible benefits in relation to engagements with a wide range of government and health services. While supporting broadband to premises, health centres, government buildings and such like, the new fibre infrastructure is mainly being deployed to provide mobile backhaul, and so support the rapid growth in data traffic.

There continues to be considerable difficulties for MNOs in a number of countries which remain war-torn or politically unstable - particularly in the Horn of Africa and in areas of Libya, the DRC, Cameroon, Burkina Faso, and Mali. These countries also tend to have non-existent or unreliable electricity provision in many areas, which adds to the cost of services through requiring diesel to operate generators. This in turn subjects them to regular theft, of equipment and also of associated cabling.

In recent years, progress was made in efforts to remove the few remaining monopolies held by incumbent telcos. In Ethiopia, the government’s plan to part privatise Ethio Telecom was put on hold in March 2022. Despite this, the market has been opened to competition, with Safaricom having secured a licence to operate fixed and mobile services. During 2022, the operator has cemented deals with Huawei as vendor for its mobile infrastructure, as also with the Ethiopian Electric Power to access the latter’s fibre network.

Airtel has exited from some of its markets, while Tigo has similarly left the region to focus on its Latin American operations. Tigo’s parent company Millicom completed the sale of Tigo Tanzania in April 2022, which finalised its exit from Africa.

There is effective competition within the mobile sector across the region, though in many countries the mobile sector is dominated by only a few players, including Vodacom, Orange Group, Airtel, MTN, and Etisalat. Competition has encouraged competition for services based on upgraded technologies, which in turn has encouraged investment. Although there remains much capacity available in 3G and LTE networks to meet the needs of most subscribers, there is growing momentum for delivering services based on 5G. This has been pushed by governments looking to achieve their wider digital ambitions. To this end, considerable progress has been made during the last two years to auction spectrum, so enabling the MNOs to extend services and upgrade network capacity.