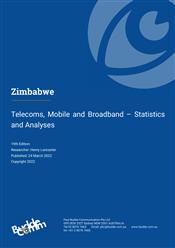 Zimbabwe becomes one of the few African countries with 5G

Zimbabwe’s telcos continue to be affected by the country’s poor economy. This has been exacerbated by the significant economic difficulties related to the pandemic. Revenue has also been under pressure from a number of recent regulatory measures and additional taxes imposed by the cash-strapped government. Inflation has become so high that year-on-year revenue comparisons since 2019 have been difficult to assess meaningfully.

The three MNOs Econet Wireless, NetOne and Telecel Zimbabwe continue to invest in network upgrades, partly supported by government efforts and cash released from the Universal Service Fund. As a result of these investments, LTE networks have expanded steadily, though services remain concentrated in urban areas.

International bandwidth has improved since fibre links to several submarine cables were established via neighbouring countries. The expansion of 3G and LTE-based mobile broadband services has meant that most of the population has access to the internet. The government has started a national broadband scheme aimed at delivering a 1Mb/s service nationally by 2030. Investment in fixed broadband infrastructure has also resulted in a slow but steady growth in the number of DSL connections, and also fibre subscriptions. During 2021, most growth in the fixed broadband segment has been with fibre connections.