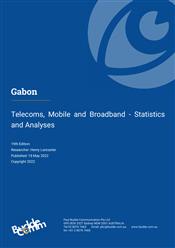 Gabon remains one of the wealthiest nations in Africa in terms of GDP per capita, with the economy largely buttressed by oil revenue.

The telecom market was liberalised in 1999 when the government awarded three mobile telephony licences and two ISP licences and established an independent regulatory authority. Moov Gabon (known as Gabon Telecom before a rebranding exercise in January 2021), was privatised in 2007 when Maroc Telecom bought a 51% stake in the operator. In June 2016 Maroc Telecom merged its two business in Gabon, thereby reducing the number of mobile network operators from four to three.

The 2009 entry of USAN (operated by Bintel Group under the brand name Azur) into a competitive market with high penetration triggered a price war that saw falling revenue and profits, forcing the operators to streamline their businesses and to look for new income streams. Following more than a year of delays, a licence to offer 3G mobile broadband services was awarded in late 2011. Azur failed to weather competition and ceased trading in late 2017, encumbered by debts and fined by the regulator for failing to observe its quality of service obligations.

In contrast with the mobile market, Gabon’s fixed-line and internet sectors have remained underdeveloped due to a lack of competition and high prices. The country has sufficient international bandwidth on the SAT-3/WASC/SAFE submarine cable but this facility is monopolised by Moov Gabon. The arrival of the ACE submarine cable, combined with progressing work on the CAB cable, has increased backhaul capacity supporting mobile data traffic, and broke Moov Gabon’s monopoly on international internet traffic.