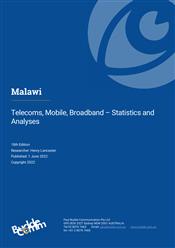 With few resources, Malawi is one of the world’s least developed countries. There has been little investment in fixed-line telecom infrastructure, and as a result, the country’s two mobile networks Airtel Malawi and TMN provide the vast majority of connections for voice and data services. Both operators have invested in LTE technologies to improve the quality of data services. The lack of market competition, together with limited international internet bandwidth, has also resulted in some of the highest prices for telecom services in the region. The government in late 2020 secured an average 80% reduction in the cost of data bundles offered by the MNOs. Following continuing customer complaints, the regulator in mid-2021 ensured that costs were again reduced, this time by about a third.

Mobile penetration remains low in comparison to the regional average and so there are considerable opportunities for further growth, particularly in the mobile broadband sector. Low penetration is partly attributed to the lack of competition, though there is the possibility that a new play come launch services by the end of 2022.

The internet sector is reasonably competitive, with about 50 licensed ISPs, though the limited availability and high cost of international bandwidth has held back growth and kept broadband access prices among the highest in the region. These limitations are being addressed, with the second phase of the national fibre backbone having started in mid-2021.