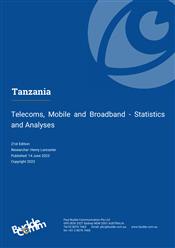 Tanzania’s telecom sector enjoys effective competition, particularly in the mobile segment. There remains considerable movement within the market, with Smart having stopped services in late 2019 and Tigo Tanzania having completed its merger with Zantel. Millicom in April 2022 completed the sale of its Tigo Tanzania unit to Axian Group, as it sought to focus on its operations in Latin America.

The government has encouraged foreign participation to promote economic growth and social development, and policy reforms have led to the country having one of the most liberal telecom sectors in Africa. The government has also sought to increase broadband penetration by a range of measures, including the reduction in VAT charged on the sale of smartphones and other devices, and reductions in the cost of data. Public opposition to a controversial tax on m-money transactions forced the government in late 2021 to reduce charges by 30%.

The MNOs became the leading ISPs following the launch of mobile broadband services based on 3G and LTE technologies. Operators are hoping for revenue growth in the mobile data services market, given that the voice market is almost entirely prepaid, and voice ARPU continues to fall. To this end, the MNOs have invested in network upgrades, which in turn has supported mobile data use, as well as m-money transfer services and m-banking services. Together, these have become a fast-developing source of revenue.

The landing of the first international submarine cables in the country some years ago revolutionised the telecom market, which up to that point had entirely depended on expensive satellite connections. Liquid Telecom recently completed a terrestrial cable network linking the East and West coasts of Africa, with an important terminus at Dar es Salaam linking to three submarine cables. In parallel, the government aims to complete a national fibre backbone network, having signed an agreement by which the incumbent telco TTC can make use of the infrastructure of the national electric supply company Tanesco, and so extend broadband availability to 94% of the country.

In late 2021, the government announced plans to extend the national backbone network from about 8,300km to 15,000km by 2023, and to provide ongoing connectivity to more countries in the region. Domestically, Vodacom Tanzania contracted Eutelsat to provide satellite broadband services to areas of Tanzania which lack connectivity, while World Mobile has launched a balloon-based broadband network in Zanzibar.