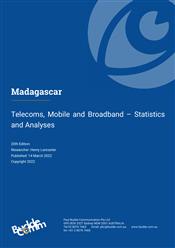 Telecom services in Madagascar have benefited from intensifying competition between the main operators, including Orange Madagascar, Airtel and the incumbent telco Telma. A fourth mobile operator, Gulfsat Madagascar, operating under the Blueline banner, has its own mobile network and in mid-2020 was licensed to build its own fibre network, thus ending the monopoly long held by Telma.

Positive developments in the international connectivity are also materialising following investments in the METISS cable connecting to South Africa and Mauritius. Landing stations for this cable were completed in June 2020. The country’s connection to the Africa-1 cable will provide additional links to the African mainland and to other international cable systems.

A national fibre backbone has been implemented connecting the major cities, with Telma having invested some $250 million to expand the network to 11,000km between 2017 and 2019. Wireless access networks are being rolled out, with Telma having completed a network upgrade to LTE-A, and with the government in mid-2020 committing itself to deploying free WiFi hotspots in a bid to ensure that poorest sections of society have access to internet services.

Penetration rates in all market sectors are still below African averages, and so there remains considerable growth potential.