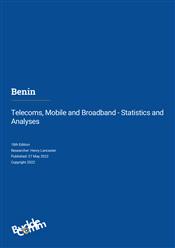 Benin’s telecom market continues to be restricted by the poor condition of the country’s fixed-line infrastructure. This has in turn hampered the development of fixed-line voice and internet services, and as a result there is negligible revenue derived from these sectors. Mobile networks account for almost all internet connections, and also carry most voice traffic. As such, it is this sector which is attracting most investment.

There is promise for considerable change in the mobile sector, which has been a duopoly between Moov and MTN since the closure of services from Glo Mobile and Libercom in 2018.

However, progress is being made in developing competition in the mobile sector. The national infrastructure provider SBIN has been licensed to provide mobile services, and in mid-2021 Sonatel Group was awarded a five-year contract to oversee progress. In May 2021 the government sought foreign companies unaffiliated with MTN Group or Maroc Telecom to bid for a fourth mobile licence.

Improved international internet connectivity has contributed to a reduction in end-user pricing, and provided the potential to transform many areas of the country’s economy, bringing a greater proportion of the population into the orbit of internet commerce and connectivity. A 2,000km fibre project started in 2016 was finally completed in mid-2021, prompting the government to secure a loan to build additional fibre infrastructure connecting four of the country’s 12 departments.

BuddeComm notes that the pandemic continues to have a significant impact on production and supply chains globally. During the coming year the telecoms sector to various degrees is likely to experience a downturn in mobile device production, while it may also be difficult for network operators to manage workflows when maintaining and upgrading existing infrastructure.