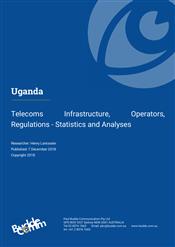 Reforms within the telecom sector in Uganda have provided the country with one of the most competitive markets in the region. The entry of MTN Uganda as the second national operator to compete with Uganda Telecom in all telecom sectors revolutionised the availability and quality of services. The incumbent telco in recent years has fallen victim to corruption and mismanagement, with the result that it failed to provide the services which customers wanted and was unable to compete effectively. The main shareholder LAP Green also consistently failed to make the necessary investments in networks and infrastructure. Uganda Telecom went into receivership in early 2017, and the government reasserted control of the company. In late 2018 a majority share in the operator was sold to Teleology Holdings.

A simplified and converged licensing regime has significantly reduced barriers to market entry and increased competition, but this has also led to price wars which have dented operator revenue. Fixed-line infrastructure remains poor, with low penetration, and in consequence fixed-line broadband penetration is also low. In consequence, consumers have flocked to mobile infrastructure to provide voice and broadband services. The licencing regime has dramatically reduced internet access charges for end-users in recent years, while new licence obligations enforced in late 2018 will ensure national internet coverage during 2019.

Uganda’s mobile market has long been overcrowded, which has encouraged some market consolidation over the years (including the sale of Orange Uganda to Africell Holding in mid-2014). It has also resulted in some casualties (including K2 Telecom and Vodafone Uganda, which both struggled to compete).

The landing of international submarine fibre optic cables on the African east coast, to which landlocked Uganda is connected via a national fibre backbone extending to its borders with neighbouring countries, has considerably improved bandwidth for operators, which in turn has provided the necessary mobile backhaul to carry the growing traffic resulting from the widening reach of LTE networks.