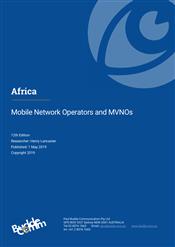 The report provides key information about the mobile operators in Africa. Topics covered include:

Africa is a region in which mobile telephony infrastructure is the mainstay for telecom services. In some markets up to 99% of voice and data connections are via mobile networks. This reflects the relative success of network deployments as much as the very poor condition of fixed-line infrastructure, which has suffered from neglect, under investment or destruction resulting from intermittent wars and civil dislocations. In a number of countries which remain war-torn or politically unstable - particularly in the Horn of Africa and in areas of Libya, the DRC, Cameroon and Burkina Faso – there are few inducements to extend fixed line services. Additional difficulties are the absence of reliable electricity and the low use of computers.

The size and range of the diverse markets within Africa have contributed to varied market penetration rates between countries. By early 2019 the highest mobile penetration was found in countries including South Africa (169%), Botswana (160%), Gabon (159%), and Mauritius (147%). To some degree high penetration reflects the popularity of consumers having multiple SIM cards despite efforts among most regulators to enforce measures by which operators must register SIM card users. These efforts are partly geared to removing dormant SIM cards from operators’ databases, and thereby providing a more accurate impression of market dynamics. There are also widely-held concerns among governments that crime, civil disturbances and terrorism can be facilitated or orchestrated via the use of mobile phones and that such activities can be curtailed by enforcing the registration of subscribers’ identities.

At the other end of the scale there are a number of countries in which far greater government direction, market competition and regulatory oversight are required for the local mobile markets to develop further. Some of the lowest penetration rates on the continent are in Madagascar and Malawi (both at about 35%), Chad and Djibouti (both at 41%), and Niger (49%). A number of other countries are notable for having suffered from considerable civil and economic disruption, including South Sudan and Eritrea (both at (11%).

The mobile market in Africa is almost entirely prepaid. Commonly, about 99% of all subscribers are prepaid since this offer a far more economically manageable means to gain access to voice and data services than does a contract plan. In addition, year-on-year a greater proportion of the continent’s population is able to afford mobile services, leading to a steady increase in the subscriber base. Affordability has been extended by the positive effects on pricing from market competition and by measures to reduce termination rates. In addition, many countries have signed up to regional agreements aimed at reducing international roaming charges. Regional roaming initiatives reduce charges for customers, increase regulated traffic, and curtail grey traffic (the re-origination of long-distance calls). The East Africa One Network Area has been in effect since April 2016, while the Economic Community of West African States (ECOWAS) came into play in December 2016. The Common Market for Eastern and Southern Africa (COMESA) provides a similar agreement (signed in October 2017) among its 19-member bloc, stretching from Libya in the north to eSwatini (Swaziland) in the south.

While network operators have seen reduced revenue from roaming access, this has generally been recouped from a sharp increase in international traffic.

A few countries within Africa retain incumbent monopolies for the provision of services, while others have seen consolidation among players (largely due to operators such as Airtel and Tigo leaving certain markets, or the failure of some poorly managed enterprises). In sum, though, there is effective competition within the mobile sector across the region. This has also encouraged competition for services based on upgraded technologies, which in turn has encouraged investment. Africa remains the main region globally for m-money and m-banking services, for example, and while there is little focus on 5G deployments as yet there is considerable effort being undertaken to upgrade networks from 3G infrastructure to LTE. This process is uneven, since in many areas GSM remains the dominant technology. While MNOs are keen to invest in LTE and so capitalise on the revenue potential of mobile data services, they face difficulties related to the paucity of spectrum and delays in auctioning additional spectrum needed to extend services and upgrade network capacity.