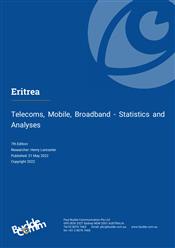 Eritrea’s conflict in Tigray is again detrimental to telecoms

Eritrea’s telecom sector operates under a state-owned monopoly for fixed and mobile services. Partly as a result of such restrictions on competition, the country has the least developed telecommunications market in Africa. Mobile penetration stands at only about 20%, while fixed-line internet use barely registers. This is exacerbated by the very low use of computers, with only about 4% of households having a computer, and most of these being in the capital, Asmara

Although the provision of internet services is open to competition, about 2% of households have access to the internet. As a result, such growth as there is in the mobile and mobile internet sectors. The national telco, the Eritrean Telecommunication Services Corporation (EriTel), continues to roll out a 3G network which provides basic internet access to the majority or Eritreans.

Considerable investment in telecom infrastructure is still required to improve the quality of services. The government has embarked on a work program to do exactly that, specifically aimed at extending services to remote areas, improving the quality of services, and ensuring that more telecoms infrastructure is supported by solar power to compensate for the poor state of the electricity network.

Additional foreign investment in telecom infrastructure, as well as introduction of more competition, would help transform what remains a virtually untapped market.