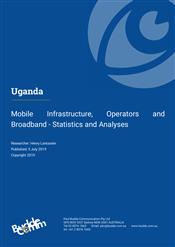 In common with other countries in the region, mobile voice and data services have had a profound effect on Uganda’s telecommunications market, particularly given the poor condition of fixed-line infrastructure. This has meant that mobile networks carry most voice traffic and account for the vast majority of internet connections. With recent investment in LTE technologies, the reach and capabilities of mobile broadband services have increased substantially. This has led to a range of social benefits, including the ability of individuals to make use of banking and a range of m-commerce services.

Greater internet bandwidth through international cables has also reduced the cost of mobile backhaul, and consequently the end-user cost of such services has fallen steadily. The market remains overcrowded, with several networks in contention, and there is room for further consolidation among operators. In recent years Bharti Airtel took over Warid Telecom and Smart Telecom entered the market, while Orange Uganda decided to exit the market, selling to Lebanon-based Africell Holding. Orange Uganda completed its rebranding as Africell in February 2015. Uganda Telecom fell into receivership and in late 2018 a majority stake was sold to Teleology Holdings. Two of the smaller mobile players, K2 Telecom and Vodafone Uganda, have not weathered competitive pressure. The management of K2 Telecom’s services and network has been taken over by Airtel Uganda, while Vodafone Uganda entered bankruptcy protection in February 2018.