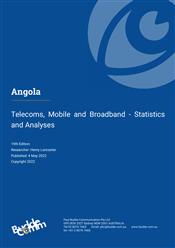 Angola’s telecom sector in recent years has benefited from political stability, which has encouraged foreign investment in the sector. The government and regulator have also set in train mechanisms to open up the telecom sector to new competitors, with Africell having secured a universal licence and in so doing becoming the country’s fourth MNO. Following an extensive investment program, the company launched mobile services in April 2022.

The MNOs were slow to develop LTE services, instead relying on their GSM and 3G network capabilities. Angola Telecom did not launch LTE services until mid-2018. This tardiness was partly due to the relatively high cost of LTE-capable handsets, which has discouraged users from upgrading. As a result, there has been slow progress in LTE network development, with only a small proportion of the country covered by network infrastructure. Despite the evident remaining usefulness of LTE and 3G in relation to current data demands, there has been some progress made with 5G. The Ministry of Telecommunications in early 2021 set up a 5G hub to assess 5G user cases, while Unitel and the new MNO Africell since mid-2021 have contracted vendors to provide 5G-ready transmission networks. The regulator in November 2021 granted licenses to Africell, Movicel, and Unitel to enable them to offer 5G services, with spectrum in the 3.3-3.7GHz range having been set aside for such services.

The government has continued to develop telecom infrastructure to help diversify the country’s economy and lessen its dependence on offshore crude oil production, which accounts for almost all exports and up to 80% of tax revenue. By extending and upgrading telecom networks the government expects businesses to become more efficient and for e-commerce to become a more prominent feature of economic growth. In addition, networks will facilitate rural access to education and health care. However, there is much progress to be made if the country is to improve the business climate and attract investors.