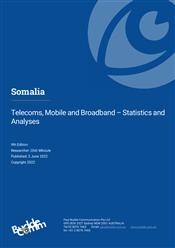 Somalia’s economic difficulties in recent years have made it difficult for telcos and the government to sustain investment in infrastructure. The government has also had to contend with militant groups which continue on occasion to force the closure of internet services in many areas of the country.

In recent years, though, the government has addressed the lack of guidance which had prevailed since 1991, when a dictatorial regime was overthrown. The National Communications Law was passed in October 2017, aimed at setting a legal and regulatory framework for the telecoms sector, while provision was made in the following year to set up a regulatory authority to oversee the telecom sector. More recently, three types of licenses were mandated to provide clarity to operators, and to bring the market closer into line with international standards. All operators were given until August 2020 to secure one of the three licence types.

Despite the many inherent difficulties faced in the country, the telecom market has flourished. Tariffs are among the lowest in Africa, and new cable systems coming on stream in the next few years (providing additional connectivity to Asia and Europe) will lead to downward pressure on retail pricing.

BuddeComm notes that the outbreak of the pandemic continues to have a significant impact on production and supply chains globally. During the coming year the telecoms sector to various degrees is likely to experience a downturn in mobile device production, while it may also be difficult for network operators to manage workflows when maintaining and upgrading existing infrastructure.