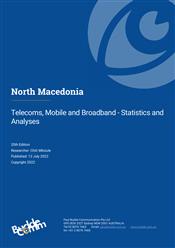 North Macedonia signs MoU on 5G technologies with US

The former Yugoslav Republic of Macedonia was renamed as the Republic of North Macedonia in February 2019. The country has been a European Union (EU) candidate since 2005. As part of the EU pre-accession process, North Macedonia has built closer economic ties with the Union which accounts for 60% of Macedonia’s exports and about half of its imports. Closer regulatory and administrative ties with European Commission (EC) institutions have done much to develop the telecom sector and prepare the market for the competitive environment encouraged in the EU.

As part of EU integration legislation North Macedonia has implemented the principles of the EU’s regulatory framework for communications, established an independent regulator and set out several provisions to provide for a competitive telecom market, including wholesale access to the incumbent’s fixed-line network. Although the fixed telephony market has been liberalised, the incumbent MakTel continues to dominate the sector. Broadband services are widely available, with effective competition between DSL and cable platforms complemented by wireless broadband and a developing fibre sector. The number of DSL subscribers has continued to fall in recent years as customers are migrated to fibre networks.

Macedonia’s mobile market is served by only two MNOs, MakTel and A1 Macedonia (known as One.Vip before a rebranding exercise in September 2019). The latter was formed from the merger of the local business units of Telekom Slovenije and Telekom Austria. A1 Macedonia in May 2016 was also merged with its sister company Blizoo, and so has been able to provide a full suite of converged services. Mobile data services are becoming increasingly important following investments in LTE network rollouts and in upgrades to LTE-A technology.