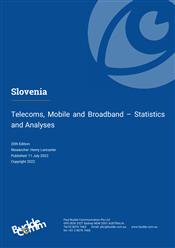 Slovenia’s telecom sector is dominated by four operators and following significant regulatory efforts to develop competition the incumbent telco Telekom Slovenije faces stiffening challenges from operators such as A1 Slovenia and Telemach. To diversify its business interests and lessen the reliance on pure telecom services, Telekom Slovenije has expanded into the electricity and insurance sectors, capitalising on its extensive customer base. In response to competition the telco has also followed the path of many European incumbents and developed an international presence, focused predominantly on the Balkans region where it is becoming a regional provider of IT and multimedia services. For its part, Telemach has become the second largest fixed-line operator and the largest fixed broadband provider.

Slovenia’s competitive mobile market has four MNOs and a small number of MVNOs, operating in a country with a potential market of just over two million people. The regulator in recent years has addressed the need of mobile operators for more spectrum, conducting a series of auctions. Four bids for a multi-spectrum auction to support 5G services were placed in February 2021, and an auction is expected to be held by mid-year. A concession for spectrum in the 700MHz was also awarded in early 2021 to support the development of M2M/IoT services.

The broadband market continues to be dominated by a small number of players. DSL lost its dominance some years ago, being taken over by fibre as subscribers are migrated to new fibre-based networks. Fibre accounted for 43% of all fixed broadband connections at the end of 2020.