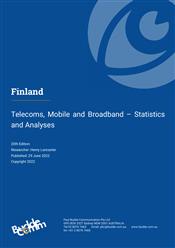 Finland’s telecom market is among the more progressive in Europe, with operators having been at the forefront in deploying technologies and with the regulator being among the first to auction spectrum for 5G use. These efforts have been supported by the government which is working towards its target of providing a broadband service of at least 100Mb/s by 2025. 5G services were available to more than 40% of the population by early 2021, and take-up among subscribers has been strong although most will remain with LTE in the short term.

The country enjoys one of the highest broadband and mobile penetration rates in the region, with customers able to make use of the latest iterations of technologies including DOCSIS3.1, LTE-A, 5G, and GPON fibre infrastructure.

Just as Finland was in the forefront of LTE developments in Europe, so has it emerged as one of the pioneers in 5G. The auction of spectrum in the 700MHz and 3.5GHh bands has enabled network operators to extend the availability of LTE services nationally and to prepare for 5G services. Spectrum in the 2.5GHz band was auctioned in mid-2020 and has since enabled the MNOs to widen their 5G footprint considerably.

The high broadband penetration has been the result of astute regulatory measures which have encouraged market competition. Companies have also been keen to invest in new technologies in a bid to address demand for improved services among customers. The incumbent telco Telia remains the dominant player in the DSL sector, but there is an ongoing shift away from DSL to fibre and mobile networks.

This report assesses key aspects of the Finnish telecom market, providing data on the fixed network services sector together with an overview of important regulatory issues including interconnection, local loop unbundling, number portability and carrier preselection. The report also profiles the major operators and assesses the state of telecoms infrastructure and services. In addition, the report provides statistics and analyses on the mobile market, including key regulatory issues, a snapshot of the consumer market, the growth of mobile data services and the development of emerging technologies and networks such as HSPA, LTE and 5G. The fixed and wireless broadband markets are also covered, together with developments in related technologies such as FttP, powerline broadband, wireless broadband, Wi-Fi and internet via satellite.