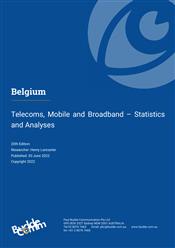 Belgium’s mobile market is served by the three network operators Proximus, Orange Belgium and BASE, and by a good number of MVNOs. Mobile networks have been upgraded to support growing mobile data use among subscribers, with near-comprehensive LTE coverage. Following some delays resulting from concerns over potential radiation, the MNOs have also launched 5G services (Telenet and Orange having done so only in early 2022). The delayed multi-band auction of 5G-suitable spectrum is scheduled for later in 2022, while the onerous restrictions on radiation parameters have in part been lifted.

There is effective competition in Belgium between the DSL and cable platforms, while in recent years government support has also encouraged investment in fibre networks. Telenet, supported by its parent Liberty Global, has extended the reach of services based on the DOCSIS3.1 standard, while Proximus also has extensive fibre/VDSL and FttP deployments and is currently investing in €3 billion 'Fibre for Belgium' program through to 2027.

Orange Belgium has been able to expand its bundled offering nationally following the acquisition of VOO in late 2021. This extended Orange’s reach deeper into Walloon and areas of Brussels.

This report profiles Belgium’s telecom market, including regulatory measures and the strategies of the main players. It also covers the fixed and wireless broadband markets, providing broadband subscriber forecasts and an assessment of technology deployments and investment plans. In addition, the report assesses Belgian’s mobile voice and data markets, including statistics on the main players, as well as spectrum auction plans, recent developments regarding LTE, and operator strategies for deploying services based on 5G.