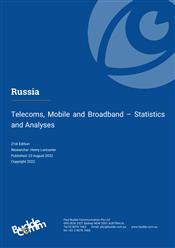 The Russian telecom market is the largest in Europe, supported by a population approaching 147 million. The overall market is dominated by the western regions, particularly Moscow and St Petersburg which are the main cities and economic centres. All sectors of the market have been liberalised, with competition most prevalent in the two largest regional markets. The incumbent telco Rostelecom, which absorbed most of the regional players, in late 2019 acquired the remaining 55% of Tele2 Russia which it did not already own. The deal strengthened the company’s ability to compete in the offering a full range of bundled services.

Telcos continue to deploy and modernise fixed-line network infrastructure to offer improved broadband services as well as a range of IP-delivered content. As a result, the fibre broadband sector has shown considerable growth, supported by the government’s program to extend the reach of broadband to outlying regions.

MegaFon is thus far the only MNO to provide commercial 5G services, though the other operators have conducted trials for some time. The largest MNOs in mid-2021 secured regulatory approval for sharing agreement under which they will deploy 5G using shared network and spectrum assets.

Mobile penetration is high, though this is partly due to the popularity of multiple SIM card use. There is pressure on operator revenue from the poor economic climate, lower pricing resulting from intense competition, regulatory measures introduced in 2018 which saw the end of roaming charges, and the effects of the Covid-19 pandemic.

This report provides an overview of Russia’s fixed-line telecom and IT markets. It includes information on key regulatory developments, data on fixed-line networks, and an assessment of telcos’ financial and operating performance. The report also reviews the mobile market, covering the major mobile operators as well as technologies and mobile data, content and applications, and a variety of updated financial and operational statistics. In addition, the report assesses developments in the fixed broadband sector, assessing the migration from DSL to fibre and the potential for DOCSIS3.1. The report includes a range or subscribers forecasts covering the fixed-line, mobile, mobile broadband and fixed broadband segments.