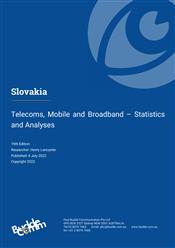 Slovakia’s telecom market has effective competition on all sectors, though the incumbent telco Slovak Telekom is the largest operator in the fixed-line voice and broadband fields. In the mobile sector, Orange Slovakia is the market leader, followed by O2 Slovakia, Slovak Telekom, and SWAN (trading under the 4ka banner). Shareholding changes have led to SWAN being merged with SWAN Mobile. All MNOs have taken part in the spectrum auctions held recently, and this has contributed to greater investment in 5G services, which are now widely available across the country.

The broadband market has shown steady growth in recent years. Fibre has become the principal platform for fixed broadband services, followed by DSL. Fibre has been supported by sympathetic regulatory measures and considerable investment among operators. The cable sector is a distant third in terms of subscribers, though cable is particularly strong in urban areas. The sector’s main operator of UPC Slovakia, a unit of Liberty Global, has steadily gained customers in recent years, though growth was negligible between 2019 and March 2022.

Slovakia’s mobile market is served by four MNOs, two of which are the local units of operators with a pan-European reach (Deutsche Telekom and Orange Group), O2 Slovakia was once the local unit of Telefónica Group before being sold to an investment concern. The introduction of mobile number portability in 2006 intensified competition between players. However, the MVNO sector remains underdeveloped, with the few operators in place having failed to gain traction and thus holding only a marginal share of the overall market.

Mobile broadband access and content services are developing rapidly in line with operators having upgraded their networks. The regulator prepared the groundwork for 5G services in line with European Union requirements, with concessions in the 3.5GHz range followed by those in the 700MHz, 900MHz and 1800MHz bands. A second 3.5GHz auction was held by the regulator in May 2022, in anticipated of the expiry of existing concessions between December 2024 and August 2025.

This report outlines Slovakia’s fixed-line telecom market, providing an overview of the regulatory environment, profiles of the major operators, and a range of operational and financial statistics. The report also provides insights into the mobile voice and data sectors, including market statistics as well as profiles of the mobile network operators, and covering regulatory issues as well as developments in LTE, 5G and mobile data services. In addition, the report addresses Slovakia’s fixed-line and wireless broadband markets, providing an overview of major players, as well as statistics, market analyses and subscriber forecasts.