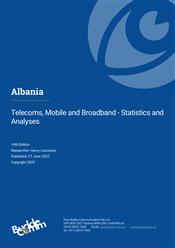 Albania’s small telecom market has experienced some significant changes in recent years. Vodafone Albania in early 2021 acquired the ISP ABCom, and committed to invest €100 million to upgrade fixed-line infrastructure to support broadband services. In March 2022, 4iG completed the acquisition of One Telecommunications and a majority stake in ALBtelecom. This could lead to the two businesses being merged, meaning that the mobile market has lost one of the main players, leaving the merged entity with a strong dominance in the mobile sector.

Consistent with developments elsewhere in the region, fixed-line telephony use and penetration in Albania is declining steadily as subscribers migrate to mobile solutions. The mobile sector is well provided with LTE networks, while operators have invested in 5G, with Ericsson as one of the principal vendors. Some of these efforts have been made in conjunction with neighbouring Kosovo, with the intention of a seamless 5G corridor along the highway connecting the two countries.