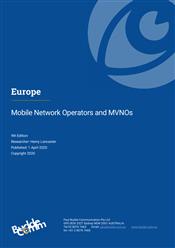 While population increases across Europe mean that there is a steady influx of new mobile subscribers, the market has a sufficiently high penetration rate that growth is largely lateral, in that subscribers are migrating from 3G to LTE networks. The proportion of 2G subscribers has become negligible and considering that GSM infrastructure carries only a fraction of mobile data many network operators are aiming to close down their 2G services and repurpose spectrum and physical assets for LTE and 5G. However, since some use remains in 2G for low-bandwidth services such as Narrow Band-IoT and M2M, GSM infrastructure in some markets is being retained. In turn, operators are also looking to repurpose 3G infrastructure and spectrum as they gear up for 5G.

5G has now been deployed by several operators across Europe, and a large number of other services launches are expected through to 2022 following auctions for 5G-suitable spectrum in several bands. This is being undertaken through a coordinated Europe-wide approach to ensure that regional markets are prepared for 5G movement simultaneously. 5G-supported mobile data will be the main driver for revenue growth in coming years, given that voice and SMS services are no longer the cash-cows of former times.

Pressure on operator revenue from OTT services, pricing competition and the drive to include a large number of voice minutes and messages in bundles, has been exacerbated by ongoing regulatory measures aimed at reducing termination rates and roaming charges. In response, network operators have increasingly bought into the fixed-line market in a bid to shore up revenue, introduce revenue diversity, and increase scale.

This report provides statistics and analyses on Europe’s mobile phone market in the wake of evolving regulatory and operating challenges, including data on subscriber numbers among the key operators.