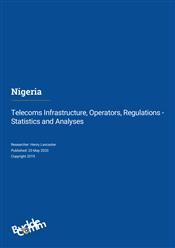 Nigeria has one of the largest telecom markets in Africa, supported by the second largest economy on the continent after South Africa. The economy has recovered from the recession experienced in 2016, with DGP growth of 1.9% in 2018. The telecom sector attracts considerable foreign investment, particularly from China, and government infrastructure programs will further stimulate investment in coming years. Market liberalisation measures have also led to hundreds of companies, many of them small and localised, being set up to provide a range of telecom and value-added services.

The mobile sector has benefited from market competition and the wider deployment of LTE technologies, which have in turn supported operator revenue growth and encouraged the adoption of mobile broadband among subscribers. Other than the key mobile network operators, there are a number of additional players operating under a unified licensing regime.

The regulator has licensed a number of regional infrastructure companies (InfraCos) to build the national broadband network and offer capacity to all service providers on a non-discriminatory, open-access and price-regulated basis.

Nigeria has the most competitive fixed-line market in Africa, featuring a second national operator (Globacom) and over 80 other companies licensed to provide fixed-telephony services. The alternative carriers combined provide around 85% of all fixed connections, though in general terms about 80% of all connections are wireless.

Several microwave and fibre-based national backbone networks are being rolled out by various companies. Nitel’s monopoly on international fibre bandwidth via the SAT-3/WASC submarine cable system ended in 2009 when Globacom’s Glo-1 cable landed in the country. The landing of additional submarine cables (supported by improved domestic fibre infrastructure) has delivered a further boost to the country’s developing broadband sector by improving bandwidth and reducing prices for end-users. Globacom is building a second cable, Glo-2, to reinforce its infrastructure in the south of the country.