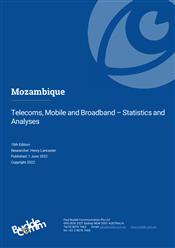 Mozambique was one of the first countries in the region to embark upon telecom reform and to open the sector to competition. The mobile segment in particular has shown strong growth since the launch of services by Vodacom Mozambique to compete against mCel, the then mobile subsidiary of the national telco Telecomunicações de Moçambique. Additional competition followed in late 2020 with the launch of services by Movitel.

Following years of poor management and underachievement, TdM and mCel were merged in early 2019, creating a new operator Mozambique Telecom (Tmcel). In the process, the structure of the market changed from having four operators (TdM, mCel, Vodafone Mozambique, and Movitel) to three (Tmcel, Vodafone Mozambique and Movitel). At the same time, a new licensing regime ensured that by mid-2019 all three operators had been provided with universal licenses, enabling them to offer all types of telephony and data services.

Mobile, fixed-line and broadband penetration rates remain far below the average for the region.

In recent years the government has enforced the registration of SIM cards, but with varying success. At the end of 2016 almost five million unregistered SIM cards were deactivated but poor monitoring meant that the process was revisited in mid-2019 and again in late 2020.

The high cost of international bandwidth had long hampered internet use, though the landing of two international submarine cables (SEACOM and EASSy) has reduced the cost of bandwidth and so led to drastic reductions in broadband retail prices as well as a significant jump in available bandwidth.

There is some cross-platform competition, with DSL, cable, fibre, WiMAX, and mobile broadband options available, though fixed broadband options can be limited to urban areas. Further improvements can be expected from the ongoing rollout of a national fibre backbone networks by Tmcel and of upgrades to mobile infrastructure.