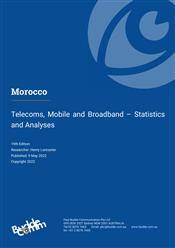 Morocco has one of the more advanced telecommunications sectors in Africa. It has been supported by the government’s Maroc Digital 2020 strategy (which encourages the development of a digital economy) and the National Broadband Plan (which aims to provide the entire population with fixed or mobile broadband by the end of 2022).

The extension of mobile broadband services has gone far to improving internet access, and it accounts for 93% of all internet connections in the country. It is to be expected that if the government succeeds in achieving its universal broadband goal by 2022, it will be largely thanks to the widespread coverage of LTE networks.

Most fixed broadband connections in Morocco are via DSL, a segment of the market that has long been dominated by the incumbent Maroc Telecom but which, at the same time, has been held back from reaching its full potential due to the national copper-based network only reaching about 20% of the population. Fibre broadband grew by almost 80% in 2020, but the technology is at a relatively nascent stage in Morocco, accounting for less than one percent of all connections.

Other companies have attempted to break into the fixed broadband market but have been repeatedly thwarted by a lack of access to Maroc Telecom’s DSL infrastructure. This situation culminated in Maroc Telecom being fined over MAD3 billion in 2020 for unfair competition practices by restricting local-loop unbundling. The fine was included in the MAD10 billion pandemic emergency fund which the government had established to upgrade its health infrastructure and assist the worst-affected segments of the economy during the pandemic. Following a profitable first quarter in 2020, Maroc Telecom donated a further MAD1.5 billion to the fund. This contribution was welcome, given that the State of Emergency continued through to late 2021.