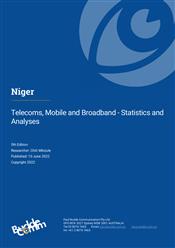 Niger is one of the largest countries in West Africa but also one of the poorest in the world. As with many African markets, a lack of fixed telecoms infrastructure has led to growth in mobile services. Niger’s mobile penetration is modest compared to other countries in the region, while fixed broadband penetration is negligible.

Following years of financial difficulties, the state-owned fixed line operator, Sonitel, was merged with its wholly owned mobile unit, SahelCom, in late 2016 to form a new entity, Niger Telecom. The merged company secured a global telecom licence in November 2017 and is aiming to develop greater efficiency through sharing resources and infrastructure.

The economic difficulties in the country in recent years, as well as a regulatory spat with authorities which saw its offices being shut down, encouraged Orange Group to sell its local business to its minority shareholder partner. The unit, once operating as Orange Niger, was rebranded as Zamani Telecom in December 2020. At the same time, the company secured funds to embark on a large-scale network upgrade program. Niger also hosts foreign investors Airtel, which leads the market, and Moov Africa, formerly Maroc Telecom.