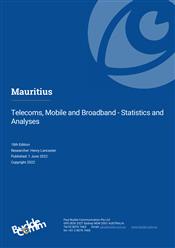 The telecom sector in Mauritius has long been supported by the varied needs of tourists. This has stimulated the mobile market, leading to a particularly high penetration rate. The response of the country’s telcos to tourist requirements also contributed to the country being among the first in the region to provide services based on 3G and WiMAX technologies. The incumbent telco Mauritius Telecom, part-owned by Orange Group, now provides comprehensive LTE and fibre broadband coverage, and in late 2021 it launched a gigabit fibre-based broadband service.

The country has seen improved international internet capacity in recent years, with direct cables linking to India, Madagascar, and South Africa, as well as other connections to Rodrigues and Reunion. Despite these advantages, some services remain slow. At the end of 2021, the median mobile data rate available was only 21Mb/s, ranking the country 84th of 138 monitored. The median fixed broadband data rate was about 19.8Mb/s, with a rank of 117th of 178 countries.

Mobile subscribers in Mauritius secured 5G services in mid-2021. This followed the regulator’s award of spectrum in two bands to the MNOs. The award was made directly, rather than via an auction, since the regulator was keen to see services made available as soon as possible. This will help the government’s ambition to make telecommunications a pillar of economic growth, and to have a fully digital-based infrastructure. Such infrastructure will also contribute to a revival of tourism, the mainstay of the economy. Although GDP growth returned in 2021, the number of tourist arrivals remains a fraction of the pre-pandemic level.