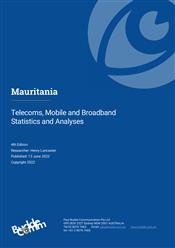 Mauritania’s small population and low economic output has limited the country’s ability to develop sustained growth in the telecom sector. Relatively low disposable income has restricted growth in the use of services, and thus of revenue which telcos can hope to gain from subscribers. In turn, this has impacted on their ability to invest in network upgrades and improvements to service offerings. This has been reflected in the repeated fines imposed against them by the regulator for failing to ensure a good quality of service. There are also practical challenges relating to transparency and tax burdens which have hindered foreign investment.

However, financial support has been forthcoming from the government as well as the World Bank and European Investment Bank. Their efforts have focussed on implementing appropriate regulatory measures and promoting the further penetration of fixed-line broadband services by improving the national backbone network, ensuring connectivity to international telecom cables, and facilitating operator access to infrastructure. Much progress has been made to improve internet bandwidth capacity, including the completion of a cable link at the border with Algeria, and the connection to the EllaLink submarine cable. In addition, the final stage of the national backbone network was completed in December 2021, which now runs to some 4,000km.

Mauritel maintains a virtual monopoly in the fixed-line sector, and there is little stimulus for new market entrants. Penetration of fixed telephony and broadband penetration is very low and is expected to remain so in coming years, though growth is anticipated following improvements to backbone infrastructure and the reduction in access pricing.

Most voice and data services are carried over the mobile networks maintained by the recently rebranded Moov Mauritel, Mattel, and Chinguitel.