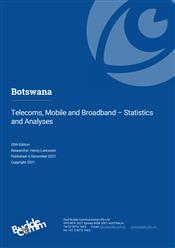 Effective regulatory reform has made Botswana’s telecom market one of the most liberalised in the region. There is a service-neutral licensing regime adapted to the convergence of technologies and services, and several operators now compete in all telecom sectors.

Botswana has one of the highest mobile penetration rates in Africa, though with this growth in the number of subscribers has slowed sharply in recent years. The popular use of multiple SIM cards from different operators convinced that regulator that there was no need introduce mobile number portability, and although the government pursued the idea for some years, it accepted in April 2021 that it would not be implemented after all.

In a bid to generate new revenue streams and secure market share, the three MNOs – Mascom Wireless (an affiliate of South Africa’s MTN), Orange Botswana (backed by Orange Group) and BTC – have entered the underdeveloped broadband sector by adopting of 3G, LTE, and WiMAX technologies. In the fixed-line broadband market they compete with a large number of ISPs, some of which have rolled out their own wireless access infrastructure.

The landlocked country depends on satellites for international bandwidth, and on other countries for transit capacity to the landing points of international submarine cables. The landing of additional cables in the region in recent years has improved the competitive situation in this sector, while prices for connectivity have fallen dramatically. Paratus Teleco in mid-2021 completed the first stage of a private network covering the entire country, and linking to the company’s international cables.

BuddeComm notes that the outbreak of the pandemic continues to have a significant impact on production and supply chains globally. The telecoms sector to various degrees is likely to experience a downturn in mobile device production, while it may also be difficult for network operators to manage workflows when maintaining and upgrading existing infrastructure.