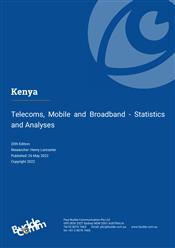 Kenya’s telecom market continues to undergo considerable changes in the wake of increased competition, improved international connectivity, and rapid developments in the mobile market. The country is directly connected to a number of submarine cables, and with Mombasa as a landing point for LIT’s newly completed East and West Africa terrestrial network, the country serves as a key junction for onward connectivity to the Arabian states and the Far East. The additional internet capacity has meant that the cost of internet access has fallen dramatically in recent years, allowing services to be affordable to a far greater proportion of the population. In parallel, the sector’s regulator has reduced interconnection tariffs and implemented a range of measures aimed at developing further competition.

The incumbent fixed-line telco Telkom Kenya has struggled to make headway in this market, prompting reorganisation in 2018 which included a sale and leaseback arrangement with its mobile tower portfolio. A further restructuring exercise in late 2020 was aimed at repositioning the company for the digital age, and to improve its ability to compete in the market.

Numerous competitors are rolling out national and metropolitan backbone networks and wireless access networks to deliver services to population centres across the country. Several fibre infrastructure sharing agreements have been forged, and as a result the number of fibre broadband connections has increased sharply in recent years.

Much of the progress in the broadband segment is due to the government’s revised national broadband strategy, which has been updated with goals through to 2030, and which are largely dependent on mobile broadband platforms based on LTE and 5G.

BuddeComm notes that the pandemic continues to have a significant impact on production and supply chains globally. During the coming year the telecoms sector to various degrees is likely to experience a downturn in mobile device production, while it may also be difficult for network operators to manage workflows when maintaining and upgrading existing infrastructure.