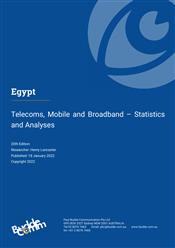 Egypt’s large telecom market is supported by a population of about 103 million and benefits from effective competition in most sectors. A liberal regulatory regime allows for unified licenses which permit operators to offer fixed-line as well as mobile services.

In recent years the government has developed a number of digital migration projects aimed at increasing average broadband speeds, delivering fibre broadband to about 60% of the population, developing an in-house satellite program, and creating a knowledge-based economy through the greater adoption of ICTs. The New Administrative Capital being built is only one of more than a dozen smart city projects, which together are stimulating investment in 5G and fibre broadband, as well as the adoption of IoT and AI solutions. The country endeavours to be a significant ICT hub in the North Africa and Middle East regions.

Egypt’s mature mobile market has one of the highest penetration rates in Africa. Progress in the adoption of mobile data services has been hampered by the lack of sufficient spectrum. To address this, the regulator in September 2020 made available 60MHz in the 2.6GHz band, though the spectrum was not allocated until late 2021. The additional spectrum will go far to enabling the MNOs to improve the quality of mobile broadband services offered. Further 5G trials are to be held later in 2022, focussed on the New Administrative Capital.

The international cable infrastructure remains an important asset for Egypt, which benefits from its geographical position. Telecom Egypt has become one of the largest concerns in this segment, being a participating member in numerous cable systems. In mid-2021 the telco announced plans to build the Hybrid African Ring Path system, connecting a number of landlocked countries in Africa with Italy, France, and Portugal. The system will partly use the company’s existing terrestrial and subsea cable networks.