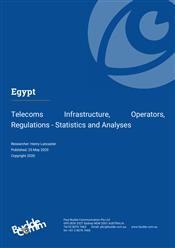 Supported by a population of about 95 million, Egypt has one of the largest telecom markets in North Africa. There is effective competition in most sectors, and this has been supported by the recent award of unified licences to allow operators to offer fixed-line as well as mobile services. The incumbent telco Telecom Egypt secured one of the licenses in August 2016 and launched mobile services in the following year. The three mobile network operators initially failed to bid for the remaining three licenses, which would have enabled them to enter the fixed-line market and provide fully convergent service offerings. This prompted the government to consider opening the bidding process to international operators, but shortly afterwards the three secured licences, being assigned spectrum in June 2017.

The country’s political crisis following the ‘Arab Spring’ revolution which began in 2011 adversely affected the telecom sector. Although revenue has remained stable, capital expenditure has been under pressure and profit margins have fallen due to a weaker local currency and inflation. International investors have also shown considerable caution in response to political uncertainties.

The government in recent months has endeavoured to secure billions of dollars in funding to roll out next-generation networks, develop technology parks and extend broadband availability. In terms of investment, and in smart infrastructure developments, the government’s ambitions to develop a new capital city east of Cairo promises to be a catalyst for an intensification in the deployment of 5G and fibre networks in coming years.

Egypt is well connected by several international submarine fibre optic cables, while it also has an extensive national fibre backbone and some of Africa’s most vibrant FttP deployments.