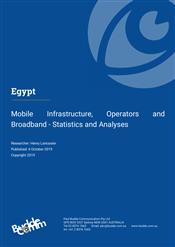 Egypt has one of the largest mobile telecom markets in Africa, with effective competition and a penetration rate of about 94%. Although the country was among the first countries in the region to launch 3G mobile services, the development of LTE services was delayed by the late issuing of licenses. Telecom Egypt in August 2016 received the country’s first unified services licence, which allowed it to offer LTE services, while the remaining three MNOs (Orange Egypt, Vodafone Egypt and Etisalat Misr) followed after having disputed the terms associated with the LTE licences offered. Commercial LTE services were launched in late 2017 under unified licences which also enabled the three network operators to offer fixed-line services using the infrastructure of Telecom Egypt.

This report outlines the major developments in the Egyptian mobile market, including updated statistics and profiles of the operators. The report also assesses market structure and regulatory measures related to spectrum awards and licensing, as well as emerging technologies and services including m-banking.