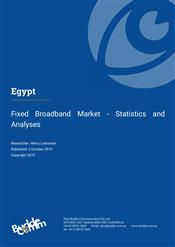 Egypt has one of the most developed internet markets in Africa in terms of the number of users and the availability of services. The country’s geographical position has enabled it to capitalise on the numerous cables which cross through it, interconnecting various parts of Europe with the Middle East and Asia. Egypt also has considerable domestic fibre infrastructure which can tap into cables at several points. The MENA subsea cable came into commercial use in late 2015, augmenting the country’s considerable international bandwidth.

Growth in the number of broadband subscribers slowed briefly at the start of the country’s political crisis in 2011, while continuing social and political disturbances since then have seen measures imposed to restrict access to content and services.

The extensive bandwidth, together with considerable market competition, has meant that Egypt offers some of the lowest prices for DSL services on the continent. The four mobile network operators Etisalat Misr, Vodafone Egypt, Orange Egypt and Telecom Egypt also offer mobile internet based on 3G and LTE technologies, while the issuing of unified licenses has enabled them to offer fixed-line services in competition with Telecom Egypt. The launch of services based on LTE in late 2017 has greatly enhanced the capabilities of mobile broadband services.