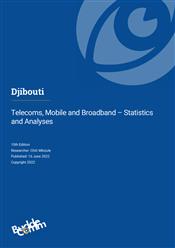 To date, Djibouti remains one of the last bastions where the national telco has a monopoly on all telecom services, including fixed lines, mobile, internet, and broadband. The lack of competition to Djibouti Telecom for such services has meant that the market has not lived up to its potential. Despite the country benefitting from its location as a hub for international submarine cables, and with Djibouti Telecom being a partner in at least eight of them, prices for telecom services remain relatively high due to the lack of competitive pressure.

The government has long harboured plans to privatise Djibouti Telecom, though thus far such plans have been delayed repeatedly. Nevertheless, it has been encouraged by the experience of neighbouring Ethiopia, which recently licensed the Global Partnership for Ethiopia consortium (controlled by Safaricom) and so broke the monopoly held by Ethio Telecom. The Djibouti government is aiming to sell a minority stake in the incumbent telco (retaining some control of decisions) while securing the financial backing and the management acumen of a foreign operator. The scheme is part of a larger plan to modernise the country’s economy more generally.