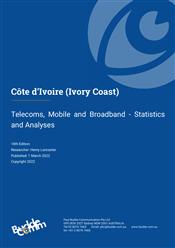 In recent years the government of Ivory Coast has helped develop a competitive telecom sector focussed on the provision of converged services, thus allowing operators to offer fixed-line and mobile services under a universal services license regime.

The fixed internet and broadband sectors remain underdeveloped. This is a legacy of poor international connectivity, which resulted in high wholesale prices, limited bandwidth, and a lack of access for alternative operators to international infrastructure. These limitations were addressed following the landing of a second cable in November 2011, and the end to the access monopoly held by Orange Côte d’Ivoire. Orange Group has also launched its 20,000km Djoliba cable system, reaching across eight countries in the region, while the 2Africa submarine cable is being developed by a consortium of companies. With a landing station providing connectivity to Côte d'Ivoire, the system is expected to be completed in late 2023.