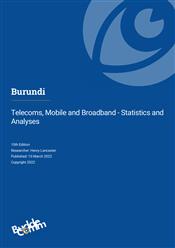 Among African countries, Burundi provides an attractive telecom market given its high population density and existing low penetration rates for all services. However, one downside for investors is that the country has a very low economic output, disposable income is also very low, and fixed-line infrastructure is poor outside the main urban areas. In practice, the is greater motivation for investors to focus on improving mobile networks than in expanding fixed-line infrastructure.

To overcome difficulties associated with the poor telecom infrastructure, the government has supported a number of prominent telcos building a national fibre backbone network. This network offers onward connectivity to submarine cable infrastructure landings in Kenya and Tanzania. The first sections of this network were switched on in early 2014, and additional provinces have since been connected. In addition, the government in early 2018 kick-started the Burundi Broadband project, which aims to deliver national connectivity by 2025. Based on this improved infrastructure the government and ITU have developed an ICT strategy to make use of telecoms to promote the country’s socio-economic development through to 2028. In addition, progress made by Tanzania with its own national backbone network has benefitted Burundi, which has been provided with onward connectivity to most countries in the region.

International bandwidth capacity has continued to increase in recent years, including a 38% increase in the nine months to September 2021, resulting in lower retail prices for consumers.

Two of the mobile operators have launched 3G and LTE services to capitalise on the growing demand for internet access. The number of mobile subscribers increased 7% in the third quarter of 2021, quarter-on-quarter. Similar growth is expected for the next two years at least, which will help bring the mobile penetration to a level closer to the average for the region.