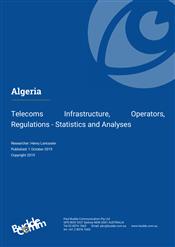 Algeria has a steadily developing telecom infrastructure with growth encouraged by sympathetic regulatory measures and by government policies aimed at delivering serviceable internet connections across the country. Fixed-line penetration was in decline for a number of years before the trend was reversed in 2015, with the momentum for growth supported by fixed-wireless connections based on LTE which had been introduced in 2014. This was short-lived, however, with subscribers since 2016 migrating from fixed-wireless to mobile LTE services.

Nevertheless, government-funded efforts are continuing to ensure that fixed-line infrastructure is extended to underserved areas. This project, accounting for about 500 remaining communities, forms part of the Universal Service Telecommunications (UTS) program. Three Universal Service Telecommunications licences were awarded in early 2016, with licensees obliged to provide fixed and wireless telecoms services to all communities. These efforts should maintain slow growth in the number of fixed-telephony connections during the next few years.

The country’s relatively well-developed infrastructure includes a national fibre backbone which was augmented with a new subsea link to Valencia in April 2017. Algeria is also part of the 4,500km terrestrial Trans-Saharan Backbone network which connects the national network with other fibre networks in the region.

Mobile penetration is growing steadily. The regulator was slow to issue 3G licences, while LTE licensees did not launch services until September 2016. Despite this tardiness, there have been significant gains in the adoption of LTE services. Coverage obligations, together with investments made in the intervening months, will ensure that LTE services will be extended rapidly in coming years in a bid to secure national internet coverage by the 2022 target.