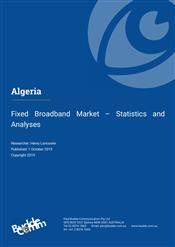 For many years the development of Algeria’s fixed-line broadband market was hampered by the limited reach of the fixed-line network. This created an environment which encouraged alternative operators to invest in fixed-wireless accesses.

The licensing of 3G spectrum to the three mobile network operators in late 2013 and the provision of LTE by all three MNOs since September 2016 has done much to ensure the availability of mobile internet access across the country. In addition, three telcos were awarded Universal Telecommunications Service (UTS) authorisations in early 2016 which allow them to provide wireless or fixed telecoms services to underserved areas. In common with other markets in the region, mobile connections account for the vast majority of internet accesses.

The government has also enabled operators (by the February 2017 Code of Posts and Electronic Communications) to access Algérie Télécom’s infrastructure through local loop unbundling, thus ending the incumbent’s effective monopoly on DSL-based services.

Improved international connectivity has substantially reduced the cost of broadband services in recent years. Algérie Télécom continues to invest to expand its national fibre infrastructure, while the government has committed funds towards its national broadband program despite declining revenue from the falling price of oil which has put pressure on its overall investments.

This report contains an overview of Algeria’s fixed and fixed-wireless broadband markets, providing key statistics, profiles of the major players, and subscriber forecast to 2024.