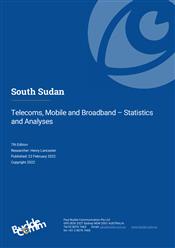 Following a referendum, oil-rich South Sudan seceded from Sudan in 2011 and became an independent nation. Having been deprived of investment for decades, it inherited one of the least developed telecom markets in the world. Other basic infrastructure is also lamentably poor. Although this potentially can create investment opportunities for service providers, such developments largely depend on a negotiated end to the protracted civil war which erupted in December 2013, and which has caused considerable mayhem and bloodshed, particularly in the oil-producing areas. With the civic struggle exacerbated by large-scale famine, investors in all economic sectors have been discouraged.

There was once investment activity among mobile network operators who sought to expand their networks in some areas of the country, but by late 2016 both Zain South Sudan and MTN South Sudan had cut back their workforces in a bid to save on operating costs, while their falling subscriber bases have strained revenue. Zain South Sudan in particular recorded considerable financial losses in 2015 and 2016. Operators in the telecom sector, as in other markets, placed themselves in survival mode and are hoping for a political settlement and a return to some degree of social stability. MTN as reported its financial data on the basis of South Sudan’s economy having been hyperinflationary since 2016.

Although MTN and Zain reported a significant fall in the number of mobile subscribers in 2017, with a consequent severe decline in revenue, both saw subscriber bases increase in 2018 as they absorbed customers which had migrated from VivaCell after that company was closed down for failing to pay back taxes. MTN South Sudan reported a 26.5% increase in the number of mobile subscribers in the year to September 2021.

South Sudan has one of the lowest mobile penetration rates in Africa. Growth in the sector in coming years is premised on a resolution to the political crisis and a recovery of the country’s economy. The virtually untapped internet and broadband market also depends to a large extent on the country gaining access to international fibre cables and on a national backbone network being in place. Sophisticated infrastructure solutions are needed to reach the 80% of the population that live outside of the main urban centres. With a negligible rate of bank account ownership, mobile payment and banking solutions also have a strong potential once a reliable mobile infrastructure is built.

The limits to growth are currently defined by widespread poverty and a low literacy rate, but the government recognises the positive feedback loop on development that access to ICT can have and is providing a range of investment incentives. The international community has provided billions of dollars in aid to strengthen governance and institutions in the young nation.

Some improvement has followed from the cable link completed by Liquid Telecom in February 2020 which connects Juba directly to the company’s submarine landing station at Mombasa. The cable was South Sudan’s first direct international fibre link, and has helped drive down the price of retail internet services for residential and business customers. A second cable linking to the border with Kenya was completed in December 2021.