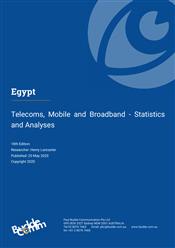 This report provides a comprehensive overview of trends and developments in Egypt’s telecommunications market. The report analyses the fixed-line, mobile and broadband sectors. Subjects include:

Supported by a population of about 95 million, Egypt has one of the largest telecom markets in North Africa. There is effective competition in most sectors, and this has been supported by the award of unified licences to allow operators to offer fixed-line as well as mobile services.

The government in recent months has endeavoured to secure billions of dollars in funding to roll out next-generation networks, develop technology parks and extend broadband availability. In terms of investment, and in smart infrastructure developments, the government’s ambitions to develop a new capital city east of Cairo promises to be a catalyst for an intensification in the deployment of 5G and fibre networks in coming years.

Egypt has one of the largest mobile telecom markets in Africa, with effective competition and a penetration rate of about 94%. Although the country was among the first countries in the region to launch 3G mobile services, the development of LTE services was delayed by the late issuing of licenses. Telecom Egypt in mid-2019 began trialling 5G and building a 5G network.

The country’s geographical position has enabled it to capitalise on the numerous cables which cross through it, interconnecting various parts of Europe with the Middle East and Asia. Egypt also has considerable domestic fibre infrastructure which can tap into cables at several points. This has helped considerably increase bandwidth availability for internet users. The extensive bandwidth, together with effective market competition, has meant that Egypt offers some of the lowest prices for DSL services on the continent.

This report outlines the major developments in the Egyptian telecom sector, including national and international network developments and covering government efforts to improve connectivity in rural and remote areas. The market also reviews the mobile market, providing statistics and profiles of the network operators as well as an assessment of the licensing regime and operator strategies relating to mobile broadband and 5G. In addition, the report assesses the fixed broadband sector, providing subscriber forecasts and reviewing the development of fibre as part of efforts to extend the availability of upgraded internet services.