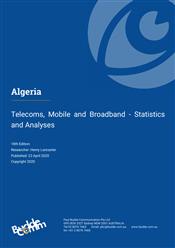 This report provides a comprehensive overview of trends and developments in Algeria’s telecommunications market. The report analyses the fixed-line, mobile and broadband sectors. Subjects include:

Algeria primed to have commercial 5G services in 2020

Algeria has a steadily developing telecom infrastructure with growth encouraged by sympathetic regulatory measures and by government policies aimed at delivering serviceable internet connections across the country. Fixed-line penetration was in decline for a number of years before the trend was reversed in 2015, with the momentum for growth supported by fixed-wireless connections based on LTE which had been introduced in 2014. This was short-lived, however, with subscribers since 2016 migrating from fixed-wireless to mobile LTE services.

Nevertheless, government-funded efforts, including the Universal Service Telecommunications (UTS) program, are continuing to ensure that fixed-line infrastructure is extended to underserved areas and thus the slow growth in the number of fixed-telephony connections should be maintained during the next few years.

Mobile penetration is growing steadily despite the tardiness of the regulator to licence 3G and LTE services. Licence obligations will ensure that LTE services will be extended rapidly in coming years in a bid to secure national internet coverage by the 2022 target.

Intensifying price competition between the three MNOs – Mobilis, Djezzy and Ooredoo Algeria – together with increases in taxes on voice and data services, have had a negative effect on operator revenue. A new roaming agreement with Tunisia will place further pressure on revenue. The MNOs have responded by investing in upgrades to LTE infrastructure, while Mobilis has also trialled 5G and is expected to launch commercial services in 2020.

For many years the development of Algeria’s fixed-line broadband market was hampered by the limited reach of the fixed-line network. This created an environment which encouraged alternative operators to invest in fixed-wireless accesses, though since late 2016 mobile LTE has taken over from fixed-wireless as a platform. In common with other markets in the region, mobile connections account for the vast majority of internet accesses.

This report contains an overview of Algeria’s fixed-line telephony market, including a review of national and international network infrastructure. The report also covers the fixed and fixed-wireless broadband market, providing key statistics, profiles of the major players, and subscriber forecasts to 2024. In addition, the report reviews the mobile market, providing analyses on operator strategies and their operating and financial performance, as well as an assessment of recent spectrum licensing.