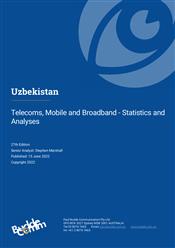 Uzbekistan’s telecom markets – both wireline and wireless – have long been playing “come from behind” in terms of their development following the country's independence from the former Soviet Union. While the government has formally adopted the principles of operating as a market economy, many elements of the old centrally planned economic model remain. This has had the effect of reducing the level of interest from foreign companies and investors in building out the necessary underlying infrastructure, which in turn has constrained the rate of growth in the country’s telecoms sector. Nevertheless, the last five years has seen the beginning of an upswing in prospects for the sector as fibre network rollouts continue out beyond the main urban centres, while the mobile market experiences some consolidation amongst the main operations to become stronger, more efficient competitors.

The fixed-line market is dominated by the incumbent state-owned provider Uztelecom, which has a much as 98% market share. With teledensity sitting at around 11%, the fixed-line segment remains relatively underdeveloped. But Uztelecom has been diligently expanding its fibre footprint across the country, and so utilisation is slowing increasing as consumers are able to take on VoIP services as part of their fibre packages. Strong growth is also present in the fixed broadband segment thanks to that same network expansion (albeit coming off a very low base), with penetration projected to reach24% by 2027 (a 5-year CAGR of 6.2%).

Despite the promising signs in the fixed markets, it is the mobile segment that continues to dominate Uzbekistan’s telecoms sector in terms of penetration, revenue, and growth. There are four major operators providing a modicum of competition; three of the four are government-owned entities although private operator Beeline Uzbekistan has been able to capture up to a third of the market. The last two Covid-affected years have proved challenging for Beeline, in particular, but its most recent operating results suggest a turnaround in the company’s fortunes is under way. Overall, the mobile market is expected to reach 100% penetration in 2023 – a 50% increase in the last five years.